Young like Me (registered as Young like me. with the alternate title Rock Me Stable/Rock me stable., sometimes called Quiet Now) is an unreleased EP by Lana Del Rey. It was created in 2005 and was registered in the U.S. copyright catalog on April 25, 2005. It is described as a CD and contains demos recorded by Del Rey around the same time as the writing of Sirens. It is listed that the CD contains seven songs which were leaked alongside the contents of From the End on January 29, 2014 under the unofficial title Quiet Now.

While no official artwork for the EP exists, an early CD copy surfaced by a friend of the Grant's included the following image. 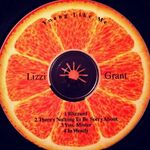 Only four songs are a part of this early version of the EP, out of the seven officially registered tracks. Included in order are: "Blizzard", "There's Nothing to Be Sorry About, "You, Mister" and "In Wendy".