Ultraviolence is the second major-label LP release by Lana Del Rey and her third studio album. It was released on June 13, 2014 by Interscope and Polydor Records.

After having commercial success with her first major-label album, Born to Die, Del Rey re-released it accompanied by a standalone EP, Paradise, in late 2012. Del Rey presumably began working on her second around this time. She was photographed in a recording studio on January 27, 2013 in Los Angeles, California. She stated that she had been recording in Santa Monica, California to finish the record. In interviews around this time, Del Rey talked about the development of her album, playing tracks, such as "Black Beauty" and describing the album as dark and spiritual.[1]

When "Black Beauty" leaked, Del Rey said "I do feel discouraged, yeah. I don't really know what to put on the record. But I guess I could just put them on and see what happens" leaving the fate of the song on the album uncertain. She added, she was working on Ultraviolence "until my record got leaked last week, 'cause my life is like completely invaded. But yeah, I'm writing songs that I really like right now. They're really low-key and stripped back, all sort of West Coast inspired."

The first announcement of the record was made at the premier of Del Rey's short film, Tropico, at the Cinerama Dome in Hollywood on December 4, 2013.

While leaving a nightclub in West Hollywood, Los Angeles, she stated to various reporters during a short interview about Ultraviolence that the album would be released on May 1st, although there was no official confirmation from her label. On April 16, Matt Edmondson announced on his show on BBC Radio 1 that the album would be released June 2, 2014. On May 8, Fnac confirmed that the release date has been set for June 13, 2014.

On April 19, 2014, during a show at the Bill Graham Civic Auditorium in San Francisco, Del Rey revealed a new song title, "Cruel World", calling it her favorite song from the album. She performed a snippet of the song before opening the show with "Cola". On May 3, 2014, a title was revealed in an interview with a French magazine called “Money, Power & Glory”. It was later confirmed that the title was "Money Power Glory".

The track listing for the album was revealed on May 8, 2014 on Amazon.fr. Del Rey later posted it to her Facebook page. The album art for Ultraviolence was unveiled on Del Rey's official tumblr on May 9, 2013. The black and white cover shows Del Rey standing by the open door of a car with "Ultraviolence" written in all caps in the same font as Born to Die and Paradise. Similarly to her previous two releases, the photo was taken at a music video shoot.

Del Rey was originally said to be working with the same three writers and producers as she was on Born to Die (Emile Haynie, Justin Parker and Rick Nowels). She also stated that was working with Dan Heath, her boyfriend Barrie-James O'Neill and that she wanted to work with Lou Reed.

On February 20, 2014 Del Rey posted a picture of herself and Dan Auerbach on Twitter with the caption "Me and Dan Auerbach are excited to present you Ultraviolence". Del Rey and Auerbach were rumored to be working together at Auerbach's Easy Eye Sound recording studio in Nashville, Tennessee in January and he was said to be producing her upcoming album. On May, 2014, Del Rey revealed that the inclusion of Auerbach was last-minute. The two met in New York when the she believed that the record was finished.

It is believed that few songs from the original production sessions made the final cut on the album as Del Rey said that she and Auerbach were initially scheduled to work together for three days but ended up spending two weeks on recording a full album. This may have been a contribution to her departure from her signature "baroque pop" sound.

Del Rey stated that the album will be spiritually influenced lyrically. She has also stated that the record will be "a little more stripped down but still cinematic and dark." On January 25, 2014, Del Rey said in a direct message on twitter to a fan, "[Ultraviolence] is absolutely gorgeous - darker then [sic] the first - so dark it's almost unlistenable and wrong. But I love it!"

While when writing the album there was no running theme, Del Rey stated that there is a narrative, with the opening track "Cruel World" being heavily inspired by the West Coast and then the rest of then album, sonically, moving towards a more Brooklyn sound. In addition, it also features heavy guitars and jazz tones.

The album was written over two years, since the release of Born to Die, but Del Rey felt there was no real substance until November 2013 when she sat down with melodies and lyrics she had been working on and wrote the album. Over three weeks in Electric Lady Studios in New York, Del Rey recorded the album with Rick Nowels. By the end of the session the album was complete. However, shortly after Dan Auerbach and Del Rey met in a club and decided to work together. A week later Del Rey rerecorded the entire album with Auerbach using a Shure SM-58 microphone and a live band. In terms of the title, Del Rey stated it doesn't necessarily intend to reference the novel and film "A Clockwork Orange", which is often credited as coining the term. Rather, Del Rey chose the title because she liked how it sounded.

"West Coast" was released as the album's lead single on April 14, 2014. It received critical acclaim and performed modestly on the charts, entering the Top 40 in many countries. A music video was released on May 7.

"Shades of Cool" was announced to be the album's first promotional single and was released May 26.

"Ultraviolence" premiered on BBC Radio 1 on June 4; the song was then released as a single on iTunes, and posted to VEVO.

Del Rey announced via Instagram that "Brooklyn Baby" would be the album's third promotional single and it premiered on June 8. 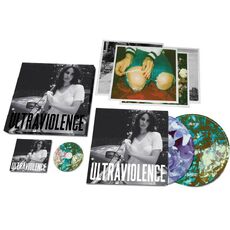 A day before it's release in Germany, the Netherlands and Switzerland on June 13, 2014, Ultraviolence leaked through people buying copies a day early. The album was then released on June 16 in France, the UK and Italy, then June 17 in Canada, the US, Spain and Mexico and finally June 18 in Japan.

Various editions of the album were sold, including standard, deluxe and a "super deluxe" boxset. The Ultraviolence Deluxe Boxset contained a deluxe 2LP picture disc set of Ultraviolence, a deluxe version of Ultraviolence on a CD digipack, and four 12" x 12" art prints. The cover of the exclusive set featured the album title printed in black foil.

Upon release, Ultraviolence was met with critical acclaim. According to Metacritic, which assigns a normalized rating out of 100 to reviews from mainstream critics, the album currently holds a score of 81/100 based on six reviews, indicating "universal acclaim".[2] Writing in The Guardian, Alexis Petridis wrote that "Every chorus clicks, the melodies are uniformly beautiful, and they soar and swoop, the better to demonstrate Del Rey's increased confidence in her voice. It's all so well done that the fact that the whole album proceeds at the same, somnambulant pace scarcely matters".[5] Kyle Anderson of Entertainment Weekly wrote about Del Rey's aesthetic, stating, "Kubrick would have loved Del Rey — a highly stylized vixen who romanticizes fatalism to near-pornographic levels, creating fantastically decadent moments of film-noir melodrama. It's an aesthetic that demands total commitment from both artist and listener, and it would be difficult to buy into if she didn't deliver such fully realized cinema." He also added, "Ultraviolence masterfully melds those elements, and completes the redemption narrative of a singer whose breakout-to-backlash arc on 2012's Born to Die made her a cautionary tale of music-industry hype." Tony Clayton-Lea of The Irish Times noted, "What seems certain is that whatever she really is, or whatever she does in her chosen milieu, Del Ray is the best at it."[8] Jim Farber of New York Daily News wrote, "Ultimately, she's milking classic male fantasies of the sad Marilyn Monroe, the babe in distress who can only be saved by you - and your dollars."[6] Critic Jamie Hamilton of DIY magazine reviewed the album on a positive note stating, "Most songs on Ultraviolence link up with a bluesy smoke of a sound. Whereas ‘Born to Die’ flirted with gloss and glitz, this is the sound of Lana hitting the road. Producer Dan Auerbach in tow, most of the time the tempo doesn’t get any quicker than a Kolo Touré sprint." Justin Charity of Complex magazine noted, "Ultraviolence is a blues affair, with moody innuendo spilling bloody and bold as the opening sequence to a vintage Bond saga." The critic also called it 'intimate', 'drunk driven'.[11]Mike Diver for Clash Music commented, "For all its lows-inspired highs, Ultraviolence is not quite the complete picture. It goes so far as to reflect, albeit perhaps coincidentally, this era: black and white, the colour has to come from the performance, not the film it’s captured on." The critic gave a bottom line for Del Rey—"A bruised beauty, just short of classic status..."[10]

Credits adapted from the liner notes of Ultraviolence.

Limited Edition cover
Add a photo to this gallery

Brooklyn Baby
Add a photo to this gallery

Print 3
Add a photo to this gallery

From the recording studio