"Tropico" (stylized as "TROPICO") is a twenty-seven minute short film, serving as a story directed to the music from the EP Paradise by Lana Del Rey. It is described as "A tale of redemption told to the music of Body Electric, Gods & Monsters, Bel Air", and stars Lana, alongside co-star actor, Shaun Ross.

The film was first announced upon the release of the first music video of "Bel Air" when it was uploaded to Lana's youtube channel on November 8, 2012. The video contained the following description:

"i lost my reputation, i forgot my truth. But i have my beauty and i have my youth. 'TROPICO' the film, coming next year", though there was little response after this.

Anthony Mandler was confirmed as the director of "Tropico", making it his third video collaboration with Del Rey, his first two being "National Anthem" and "Ride". Shooting primarily took place in Chatsworth and Los Angeles. The film features actors who play Elvis Presley, Marilyn Monroe and Jesus Christ, (all of whom are mentioned in "Body Electric") after cast and crew members uploaded pictures to their personal instagrams.

"Tropico" was released December 5, 2013, both on VEVO, and also as a digital EP on iTunes including the three songs featured in the film, as well as the film itself.

"Tropico" premiered in the Cinerama Dome in Hollywood on December 4, and a meet and greet was held by Lana  for fans. On the night, Del Rey also revealed the name of her new record, Ultraviolence, with the tracklist yet to be revealed.

In the weeks leading up to the release of "Tropico", Lana released two official teasers on her official youtube channel, Lana Del Rey, as well as two official trailers, one released on her youtube channel, and one on her VEVO channel, LanaDelReyVEVO. The first teaser shows Lana crouching on her knees and praying while wearing a blue dress and head dress, and the second teaser shows Del Rey and Shaun Ross together as Adam and Eve in the Garden of Eden with Marilyn Monroe, Elvis, and Jesus.

Starting July 27, 2013, Lana released the first of three official teaser posters of "Tropico". All of the posters are shot in the opening Garden scene with the words "TROPICO" sprawled in capital letters somewhere across the poster. The first poster is shot in full black and white, and features Lana and the white serpent from the Garden of Eden in her hands, as it slithers around her shoulders. The second features both Lana and Shaun together in the garden in a full-length body shot with the gold foil plants and trees surrounding them. The third, and final poster was released in sepia tone. This shot sees Lana crouching on her knees on the ground in the the same outfit used in the first official teaser video. 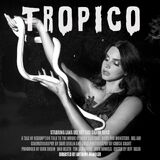 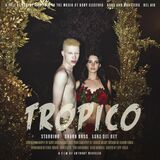 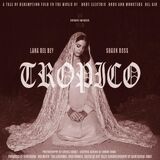 "Tropico" was released as a digital EP on iTunes.

Retrieved from "https://lanadelrey.fandom.com/wiki/Tropico_(film)?oldid=8377"
Community content is available under CC-BY-SA unless otherwise noted.