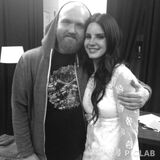 Tom Marsh is an English producer, songwriter, and drummer.

Marsh is Del Rey's live drummer. He has joined her to play drums onstage for the 2013-2014 Paradise Tour, 2015 Endless Summer Tour, 2016 Festival Tour, as well as the 2018 LA to the Moon Tour and various other performances.

Retrieved from "https://lanadelrey.fandom.com/wiki/Tom_Marsh?oldid=71234"
Community content is available under CC-BY-SA unless otherwise noted.