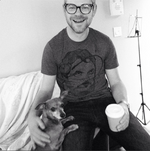 Timothy Elliot Larcombe is a British songwriter and producer. He worked with Lana Del Rey on tracks that appeared on Born to Die, Paradise and Lust for Life, as well as at least two unreleased songs.

Retrieved from "https://lanadelrey.fandom.com/wiki/Tim_Larcombe?oldid=90025"
Community content is available under CC-BY-SA unless otherwise noted.