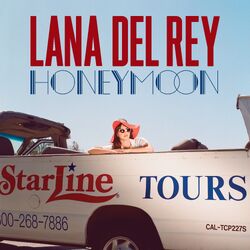 Honeymoon is the third major-label LP release by Lana Del Rey. It has been announced that the album will be released on September 18, 2015 and was available for pre-order on the 21st of August.

Retrieved from "https://lanadelrey.fandom.com/wiki/Template:Main/featarticle?oldid=24674"
Community content is available under CC-BY-SA unless otherwise noted.