Sirens is an unreleased demo album by Lana Del Rey, written and recorded in 2005 and 2006, under the pseudonym May Jailer. The album leaked on May 31, 2012, after much speculation about its contents by fans months before. Certain songs from the album also appear on the EPs Young like Me and From the End, and the mixtape The Phenomena of Lizzy Grant.

After learning six chords on acoustic guitar, Del Rey took up the challenge of writing as many songs with those chords as possible. The album was the result of her experimentation. Almost all of the songs on the album fall into the same range, and many are in the same key. Every track is solely composed of only Del Rey's vocals and acoustic guitar, and often focuses on arpeggiated melodies using fingerpicking. Almost all tracks have Del Rey singing in a higher register with feathery vocals, except for "Birds of a Feather", which has heavy autotune. All songs were recorded in Del Rey's hometown, Lake Placid, New York, at the Jim Cushman Studio. The producer of the album remains uncredited, although the producer may be Del Rey herself. According to his profile on LinkedIn, Alex Frizzell did the audio engineering of the album.[1]

"The songs on Sirens find Lana Del Rey singing tremulously over acoustic guitars, showing plenty of the languid mystique that would later come to define her but also displaying a different sort of fragile Lee Hazlewood narco-haze vibe."

Many music journalists compared the album to Pieces of You by Jewel, due to its acoustic guitar fingerpicks and feathery vocals. Critical reviews of the album were highly positive, praising Del Rey's innocent vocals and the simplistic overtones. Becky Bain of Idolator commented that "though her vocals are often weak and shaky, her tone sounds delicate and sweet on all these simple tracks". Many critics compared the album to something they would hear in a small-town coffee shop.

Many of the themes on the album, including love lost, loss of purity, and coming-of-age were included in Del Rey's later work, especially Born to Die. The album does however lack the highly concentrated Americana references often included in her later recordings.

The album was primarily written about K, both directly and indirectly. It includes the story of K's death in Sirens and talks about him further in songs such as "Drive By" and "My Momma". The track "Next to Me" was written about Bill, and was presumably the first song Del Rey wrote about him.

Although there's no official artwork cover known for the album, a TikTok user who owns a copy of the CD uploaded a video to the platform showing the copy he owned, which included a note by Del Rey (under her pseudonym at the time, May Jailer) and an orange-colored CD and black colored logos for 'May Jailer' and 'Sirens'.[2] 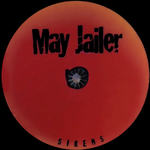 Certain songs from Sirens also appear in the EPs Young like Me and From the End, but also, these works include songs that weren't included in the final tracklist of Sirens. It's speculated that these projects were entirely made up of songs recorded during the Sirens sessions, so it's likely that these extra songs were originally intended for Sirens, but didn't make the cut.

Sirens originally surfaced when a blogger, who had ordered the original CD online in 2006, mentioned owning a "record by Ms. Grant that you will never hear". However there was no metadata on the CD and the tracks were labeled simply as "Track 1", "Track 2" etc. No titles could be confirmed except "Junky Pride", "A Star for Nick", "Out with a Bang", and "Bad Disease" as they were streamed on various other platforms online under these titles, the rest were simply assumed by fans. When From the End and Young like Me were leaked online during January 2014, they contained many duplicate tracks that changed and confirmed some of the titles in Sirens, leaving only "Next to Me", "My Momma", "Pretty Baby" and "Birds of a Feather" unconfirmed.