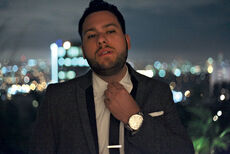 Daniel Omelio, professionally known as Robopop, is a New York-based producer and songwriter. He has collaborated with artists such as Kesha, Maroon 5 and Gym Class Heroes, as well as Lana Del Rey on her debut major-label album Born to Die. Del Rey's song "Video Games" was produced by Omelio, and is notable for being the track that launched her into international success. Omelio does not have a songwriting credit on the song, and its demo was produced by Justin Parker.

Retrieved from "https://lanadelrey.fandom.com/wiki/Robopop?oldid=90482"
Community content is available under CC-BY-SA unless otherwise noted.