From March 2019 to July 2019, leading up to the release of Norman Fucking Rockwell!, Del Rey performed at various festivals, starting in New Orleans and then touring across Europe. At these festivals, Del Rey performed the singles "Mariners Apartment Complex", "Venice Bitch" and "Doin' Time" from Norman Fucking Rockwell! for the first time. Although these new songs were incorporated into the setlist, much of the stage design and aesthetic of these appearances were reminiscent of the LA to the Moon Tour.

On August 1, 2019, Del Rey announced dates for a new headlining tour intended to promote Norman Fucking Rockwell!. The first dates announced consisted of 8 across North America and 8 across Europe, with general sales beginning on August 9, 2019. The tour sees Del Rey revisiting venues such as the WaMu Theater in Seattle and the Hollywood Bowl in Los Angeles. At this time, possibility of future legs is undetermined.

On February 20, 2020, it was announced that the entire UK and European leg of the tour was cancelled due to an illness that caused her to lose her singing voice.[1] Del Rey took to Instagram to address the cancellation and expressed her intent to make it up to fans in the future.[2]

In total 20 songs were performed throughout the tour: 10 from Norman Fucking Rockwell!, 6 from Born to Die, 5 from Ultraviolence, 4 from Lust for Life, 1 from Paradise, 1 soundtrack song and 17 covers. 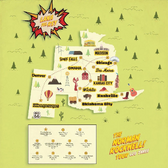