Norman Fucking Rockwell! is the sixth studio album and fifth major-label studio album by Lana Del Rey. It was officially released worldwide on August 30, 2019, by Polydor and Interscope Records.[1]

On January 28, 2018, on the red carpet of the 60th Annual Grammy Awards where Del Rey's previous effort Lust for Life, released 8 months prior, was up for nomination for Best Pop Vocal Album, Del Rey spoke to Pitchfork about a new track "Bartender" that didn't "belong to a record yet".

On February 16, 2018, at a show in San Diego, Del Rey revealed the title of a song "Sylvia", inspired by writer Sylvia Plath, indicating she had been working on a new project. The song was retitled to "Sylvia Plath," until it was finally named "Hope Is a Dangerous Thing for a Woman like Me to Have – but I Have It".

At the end of the next month, March 30, Del Rey posted a short video to Instagram of her singing "Happiness Is a Butterfly" which she described as her "new song".

On May 10, 2018, an unknown song was played in the background of her sister, Chuck's Instagram story[2] which would later be revealed to be "Bartender".

Throughout early 2018, Del Rey was photographed with multiple musicians such as Marina (then known as Marina and the Diamonds) and Jack Antonoff on February 26,[3][4] Marina, Florence, and the Machine and FKA Twigs on March 7,[5] and Wiz Khalifa on March 19,[6] leading to speculation that any or all of the musicians could be featured on her upcoming project.

Upon the release of "Mariners Apartment Complex", radio DJ Annie Mac asked "Is this [song from] a bigger project? Are you seeing an album coming out of these sessions?" to which Del Rey confirmed that she had an album saying "We have a collection of songs that I've sequenced and I really love."

On September 18, 2018, during an interview with Zane Lowe on Beats 1 Radio, Del Rey premiered "Venice Bitch". During the interview, Del Rey announced that the album will be titled Norman Fucking Rockwell and will have 11 tracks. The information was also confirmed by an article from The Fader.[7] She also announced the title track during the interview. Del Rey came up with the title for the record in March.

During an Instagram livestream on December 30, 2018, Del Rey expressed her desire to release a song on January 8, 2019, but was unsure. She also confirmed that the album is done and mastered and went on to describe it as "deeply introspective" and on "some sad girl Shit [sic]".

On August 7, 2019, an album sampler with thirty-second snippets of each song from the album surfaced online through a French music website called Qobuz.

During an Instagram livestream on September 4, 2019, Del Rey revealed the album was originally titled "Bird World".

Production for the album was mainly handled by Jack Antonoff (excluding "Doin' Time", "The Next Best American Record" and "Bartender") marking the first time Del Rey had collaborated with the musician. Antonoff and Del Rey started working in January 2018, and by the following March, Del Rey explained she knew the record would be nearly ready by Labor Day. When asked how she got the point of wanting to make the record with Antonoff, Del Rey explained:

“That was such a happy accident for me, I knew Jack [Antonoff] seven years ago when we were both making records at the same time with Emile [Haynie] - he was in fun. - but I didn't really reconnect with him until January [2018], and he was like "We should definitely sit down and just start doing stuff". I told him I had three songs that I already liked for a new record, that I wasn't really writing music, and we sat down at his studio in New York and I mean he kind of started everything, 'cause he would just play chords for hours, and like, he's so good at piano, some of the stuff he writes, like, just melodically, is really - it's kind of classical - and in my case it ended up turning more folky. He made it really easy for me to just riff over everything he was doing, and in our first week I had two songs I just thought were maybe like two of the best songs I had written. He just has a lot of truth in him.”

In regards to Antonoff's production history being mainly pop oriented, Del Rey explained that when meeting him for the first time she was "expected to get in there with [Antonoff] and for him to have like all of these four-to-the-floor beats already like mixed and produced" however was surprised that he sat at a piano and started playing chords which Del Rey felt had a "cheery, Sgt. Peppery feel". Del Rey was so impressed by the chord progressions he was playing that she recounted:

“For the first few months I worked with [Antonoff], he would play me like 5 chords in a row that would end up becoming a new song each time and I would ask him like - I would legitimately ask him - "are you sure I'm allowed to have this? Like, do you not wanna save that progression for yourself?" and he thought that was hilarious he was like "No, I've been dying to like meet you and give you this".”

When asked about the creative path Del Rey wanted to go down with the album, Del Rey explained the album was "in the vein of a Laurel Canyon sound" but that the album had "transformed a little bit because there are some surf elements to some of the songs". She clarified the album was not "really surf-y like Dick Dale" but featured a lot of electric guitars with a little Red Hot Chili Peppers influence.

On December 30, 2018, Del Rey confirmed the album cover was shot but was uncertain on using it as her manager Ben Mawson didn't like it. The original album cover was instead used for the Urban Outfitters exclusive vinyl. She continued that she has another idea in mind and is planning on shooting it soon, while also confirming that it will not be shot by a previous and frequent collaborator, Neil Krug. According to Del Rey, Steven Klein was supposed to shoot the second cover art.[9] However, Del Rey posted the artwork to social media on July 31st, which was shot by her sister, Chuck Grant[10] and it features model Duke Nicholson. The two appear to be on a boat, with the American flag in the background. 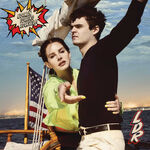 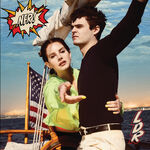 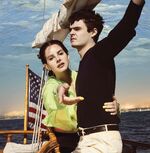 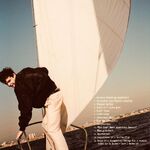 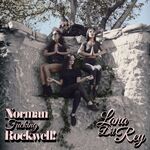 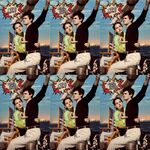 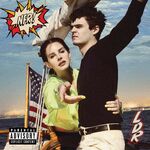 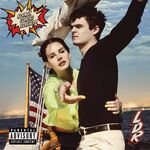 When asked about her new record, Del Rey explained "I don't think [the album] will be out until the top of [2019] just because I actually am working on a little book of poetry. I think I'm just going to self publish it and put it out before hand." On November 3, 2018, RMF Classic Radio reported that Norman Fucking Rockwell would be released at the end of March 2019. The station added that the album will have 11 tracks and a lot of electric guitars, which Del Rey confirmed during her interview with Zane Lowe, however no announcement from any of Del Rey's official channels backed up their claim. On December 5, 2018, MTV UK also reported the album would be out on March 29, 2019; again with no followed official confirmation.[11] Del Rey also liked a tweet that Dazed magazine tweeted on December 31 linking an article that mentioned this same March date, furthering speculation.[12]

During January 2019, a press release from Universal Music Canada reported that the album was set for a mid-2019 release, and not March 29, as previously alleged by MTV UK.[13] In Del Rey's interview with i-D magazine discussing the Gucci Guilty campaign published on February 7, 2019, March was again disclosed as the release date.[14] However, the official release date has not been confirmed. On February 22, 2019, Del Rey's manager Ben Mawson replied to a fan comment regarding the album's release stating they didn't have an official date and that it would be known when they did, adding "good music takes time to finish",[15] despite Del Rey previously stating that the album was finished back in December 2018. After much silence, on March 20, 2019, Del Rey responded to a fan question regarding the whereabouts of the album via her unofficial Twitter account (@MissDaytona), she replied "album is done lil b but who knows when it will come out. [sic]".[16]

On June 22, 2019, Del Rey finally confirmed during a concert in Dublin, Ireland that the album will be out in August.[17] Following, on August 1, 2019, the official artwork and tracklist were released along with the pre-order, and an album trailer featuring clips from "Doin' Time", "Venice Bitch", "Mariners Apartment Complex" and "Norman Fucking Rockwell".

On August 17, 2019, 13 days prior to the album's release date some orders from Del Rey's website shipped early resulting in the whole album, with an exception of "How to Disappear", to leak in low quality. On August 27, 2019, the whole album leaked in high quality for the same reasons.

To promote the album, Del Rey released several vinyl, CD, and cassette variants; some of which have alternative artwork. These releases are compiled in the following galleries.

On September 7, 2018, Del Rey announced on her Instagram and Twitter profiles that the first single to be released from the album would be - "Mariners Apartment Complex", to be released on September 12.[18][19] "Venice Bitch" was released 6 days later on September 18 as the second single from the album. Del Rey expressed interest in releasing the third single in October 2018, but was unsure as she felt it was more of a "stand-alone song" and more "serious" and "thoughtful" than fun.

On January 2, 2019, through an Instagram post, Del Rey confirmed "Hope Is a Dangerous Thing for a Woman like Me to Have - but I Have It" as the third single off the album, to be released on January 9, 2019.[20] The post was later removed. On January 9, 2019, several music sites reported, per a press release, that these three singles were solely "fan or buzz singles" and that the official first single from the album was still forthcoming.[21][22] Other sites claimed that the appearance of these tracks on the final tracklist was unclear.[23]. On March 4, in an interview for Elle Magazine, Del Rey said the three singles released so far are her favorite songs in the album, and that was the reason she decided to release them first; she also expressed her intention to release two more singles before the album's release. Del Rey did not deny or confirm the inclusion of the three first singles in the album[24].

Del Rey's cover of "Doin' Time" was released as a single on May 17, 2019, and its appearance on the album was unclear as well, as it was promoted as a standalone single for the Sublime documentary. Eventually, all four tracks formed part of the album tracklist when Del Rey revealed it on July 31, 2019.[25]

On August 22, 2019, "Fuck It I Love You" and "The Greatest" were both simultaneously released as the album's fifth and sixth single respectively.[26]

"Fuck It I Love You"

Fourteen days after the album's release, it reached number-one on the iTunes world chart.

Del Rey posted the tracklist on July 31st, along with the cover art. The album has 14 tracks.

The seventh track of her follow-up record Chemtrails Over the Country Club, "Not All Who Wander Are Lost", is confirmed by a leaker to be an outtake of the album, originally titled as "Wanderlust".

Lust for Life concept demo "Valley of the Dolls" along with a few other unnamed tracks were sent to Jack Antonoff early on in the album's production. That may imply that it was possibly considered for the album.

A previously unknown song, titled "LA Who Am I", is said to be an outtake of the album, recorded in 2018. It was most likely reworked into or based upon her poem "LA Who Am I to Love You". The full track has yet to leak and much about it is unknown.