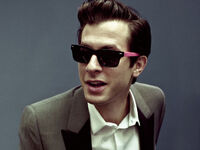 Mark Ronson is an english DJ, singer-songwriter and producer. He has worked notably with artists such as Bruno Mars, Adele and Amy Winehouse. He worked with Lana Del Rey during the recording of Honeymoon,[1][2] but ultimately did not contribute to the album.[3] Ronson produced at least one known song but his contribution was scrapped.[4]

Retrieved from "https://lanadelrey.fandom.com/wiki/Mark_Ronson?oldid=84792"
Community content is available under CC-BY-SA unless otherwise noted.