Lust for Life is the fourth major-label studio album by Lana Del Rey. It is expected to be released on May 26, 2017, according to Music Week and numerous magazines, but this has not been officially confirmed by either Del Rey or her team.

In December 2015, three months after the release of her third major-label studio album Honeymoon, Del Rey opened up about writing her next record in an interview with NME Magazine, saying "I do have early thoughts about what I’d like to do with [the next album]. My label, Interscope, is pretty flexible and open to my records coming out at any time, so I don’t have that pressure. I’m just happy to be able to keep on making music I can stand behind. That’s enough for me."[1]

In January 2017, the song "Love" was registered under the title "Young In Love"[2] to the Harry Fox Agency.[3] The title of the track had been long speculated previous to this due to leaks of information on social media by fans. The track leaked in full on February 17, 2017 before any official announcement from Del Rey or her team had been made regarding the song or the upcoming album. The next day, February 18, the song was rush released onto all music services worldwide, as the first single from the record. The second single "Lust for Life" (feat. The Weeknd) was officially released on April 19, 2017.

On March 29, 2017, Del Rey confirmed the album's title - Lust for Life - by uploading an album trailer to all of her social media accounts. It is confirmed that the album will include guest featured artists, including The Weeknd, Sean Lennon, and Stevie Nicks. The album is set to be released in spring 2017. About the album, Del Rey stated "I made my first 4 albums for me, but this one is for my fans and about where I hope we are all headed."[4]

For the production of the album, Del Rey collaborated with previous producers Rick Nowels and Emile Haynie, both of who worked on "Love" alongside Benny Blanco. On November 4, 2015, long-time collaborator Justin Parker posted an Instagram photo of himself and Del Rey in a studio together, hinting towards potential involvement in new music.[5] One song, "Wild One", written by Del Rey and Parker had been registered earlier in the year, although it is unknown if it will be featured on the album.

On February 15, 2016, Billboard posted a short video interview with Del Rey on the Pre-GRAMMY Gala Red carpet opening up about the new record's sound. Del Rey explained, that while the album would be in a different direction to her previous record Honeymoon, "it's kinda in the same aesthetic" and "[the fourth major-label studio album] has more to do with just like... I don't know... a clarity of inner dialogue that I feel is coming through better."[6] During a livestream on February 20, 2017, Del Rey described the aesthetic of the album as "retro sensibility with a futuristic flair", and on February 24, Del Rey opened up more about writing the record in an interview with Jo Whiley from BBC Radio 2, and she said:

"I've been writing for the last fifteen months and I guess I started out thinking that the whole record was gonna have sort of a 50s/60s feeling, with some kind Shangri-Las and early Joan Baez influences, but I don't know as the climate kept on getting more heated politically, I found lyrically everything was just directed towards that. Because of that the sound just got really updated and I felt like it was more wanting to talk to the younger side of the audience that I have. I guess it's a little more socially aware. It has kind of a global feeling."[7]

Del Rey revealed the official album artwork for Lust for Life on April 11, 2017 through social media. The artwork was designed by Mat Maitland and Markus Bagå of Big Active. It was photographed by Del Rey’s sister, Chuck Grant with Kodak Porta 800 film, with styling by Johnny Blueeyes, hair by Anna Cofone, and makeup by Pamela Cochrane. The cover depicts Del Rey wearing a white dress and smiling with daisies in her hair, the same look from the "Love" music video, while behind her there is a truck, which is also featured in the "Love" music video. The "Lana Del Rey" logo used on the cover is Del Rey's original logo (with some retouches) that she commonly used before the release of her major-label debut album, Born to Die. 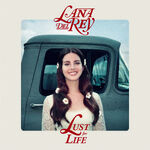 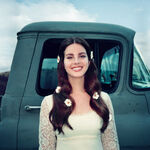 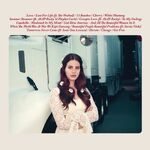 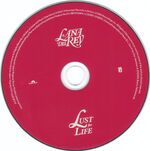 Standard CD
Add a photo to this gallery

The album is scheduled to be released on May 26, 2017, according to Music Week, although that date has not been confirmed by Del Rey or her team.[8][9] Promotional posters advertising the music video for "Love" directed by Rich Lee, were found across Los Angeles on February 17, 2017.[10]

On March 29, 2017, Del Rey released a special album trailer on her official VEVO channel on YouTube and revealed the name of the record. The video features black and white scenes of Del Rey with a monologue of her discussing the album. It was directed by Clark Jackson, who also produced the "Love" music video. In an interview with the director, he stated that Del Rey recorded the entire monologue herself on her phone and the 'Hollywood' sign was completely hand made out of papier-mâché, foam, and chicken wire. On the concept of the video, he said: "We wanted to play with the idea of old 16mm instructional videos mixed in with ’50s and ’60s era sci-fi shows." The video also teases various mysterious symbols that will "become more clear as songs and the rest of the album are released."[11][12]

You know, in this town, an artist really needs a lot of space when they’re trying to create something special. A place to cultivate a world of their own, far away from the real world that’s around them. Luckily for me, I live right inside the middle of the “H” of the Hollywood sign. And this is how I spend most of my nights: perched high above the chaos that swirls within the city of angels below.

Now don’t get me wrong, I love to dip my toe into the muck and the mires of the city every now and then. Especially on Tuesdays. But truthfully, when I’m in the middle of making a record, especially now when the world is in the middle of such a tumultuous period, I find I really need to take the space for myself far away from real life, to consider what my contribution to the world should be in these dark times.

So each morning, I have the luxury of asking myself, “What shall I cook up for the kids today? Something with a little spice? Something with a little bitterness but is ultimately sweet? Or shall I take the day off and turn down the fire, and just take a moment to send my love to them over the ether?” Because sometimes, just being pure of heart and having good intentions and letting them be known is the most worthy contribution an artist can make.

So, even though these times can feel a little bit crazy, they’re not so very different from what other generations have experienced at one time or another before. Amidst all the uncertainty, and as we transition out of one era into another one, there’s no place I’d rather be than smack-dab in the middle of “Hollyweird” making this record for you. Because you, and the music, and this place, are my love, my light, my lust for life.

The first single serving as the lead single from the record, "Love", was officially released worldwide on February 18, 2017, shortly after being leaked online. The single was met with extremely positive reactions and charted in the top 10 on iTunes in many countries. The official music video was released on February 20.

The second single is the title track from the album, "Lust for Life", featuring the The Weeknd. It was premiered on BBC Radio 1 on April 19, 2017, and simultaneously released worldwide. It too was met with extremely positive reactions, and like "Love", charted in the top 10 on iTunes in many countries.

"Coachella - Woodstock in My Mind"

"Groupie Love"
Add a photo to this gallery

The following is a list of songs that are confirmed to be featured on the album.

Since the release of Honeymoon, tracks have been registered with Del Rey as a collaborator, and could be featured on the upcoming album, although nothing is confirmed.

Retrieved from "https://lanadelrey.fandom.com/wiki/Lust_for_Life_(album)?oldid=54062"
Community content is available under CC-BY-SA unless otherwise noted.