Start a Wiki
The LA to the Moon Tour is the fifth concert tour and third worldwide concert tour by Lana Del Rey. It is in support of her fourth major-label album, Lust for Life. The tour began on January 5, 2018 at the Target Center in Minneapolis, Minnesota, and concluded at Hajógyári Island in Budapest, Hungary on August 10, 2018.

Shortly after the release of Lust for Life, Del Rey embarked on a small promotional concert tour in support of the album that mostly consisted of festival performances in Europe and North America as well as select concerts at intimate venues in London, San Diego, Anaheim, San Francisco, Santa Barbara and New York City, as well as two less intimate arena shows in Liverpool and Glasgow. These shows took place from July to October of 2017, before the LA to the Moon Tour.

On August 19, 2017, Del Rey shared a video explaining that she was planning a world tour in support of her recent album, Lust for Life. On September 11th, Del Rey met a fan in Los Angeles who asked her when the tour would begin, which she responded that it would begin in January of 2018. Shortly after, on September 21st, Del Rey shared a video to announce that she would be unveiling a line of merchandise the next day, and that each person who purchased the merchandise would be given an exclusive pre-sale code for the tour. The next day, Del Rey livestreamed on Instagram to reveal her merchandise and discuss more details about the tour. The North American leg of the tour was announced the following week on September 27th. On the same day, Del Rey revealed the Jhené Aiko and Kali Uchis would be joining her as opening acts, and that she would be performing at multiple festivals in South America.[1][2] Tickets for the North American leg became available for pre-sale on September 29, followed by general sale on October 2nd. The tour will include shows in North America, South America, Europe, Australia and the Middle East.[3] On October 16, 2017, Del Rey announced tour dates for shows in Australia and Europe.[4]

On January 16, 2018, it was announced that American indie pop and alternative singer-songwriter Børns would serve as the opening act for all three dates of the Australian leg of the tour from March 29th to April 2nd 2018. 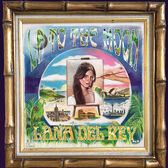 Italy
Add a photo to this gallery

Lust for Life visor
Add a photo to this gallery

Zippo lighter
Add a photo to this gallery

Retrieved from "https://lanadelrey.fandom.com/wiki/LA_to_the_Moon_Tour?oldid=83397"
Community content is available under CC-BY-SA unless otherwise noted.