"Iron" is a song written by Yoann Lemoine and produced by Gustave Rudman. Lana Del Rey and Lemoine (Woodkid) sang the song as a duet live. 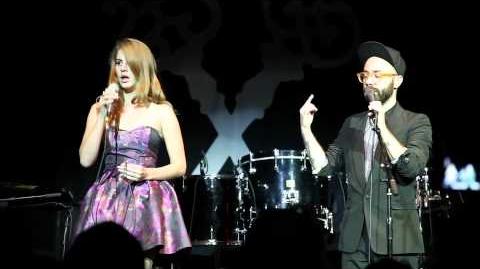 Woodkid and Lana Del Rey worked together on Del Rey's "Born to Die" music video. Lana Del Rey was a special guest at a Woodkid concert at the Highline Ballroom. Woodkid and her performed "Iron," the lead single off of Woodkid's Iron EP. The video was uploaded by the official Woodkid user and went up on October 28, 2011. At the same concert, the two performed "Video Games".

Deep in the ocean, dead and cast away
Where innocence is burned in flames
A million mile from home, I'm walking ahead
I'm frozen to the bones, I am...

A soldier on my own, I don't know the way
I'm riding up the heights of shame
I'm waiting for the call, the hand on the chest
I'm ready for the fight and fate

The steady burst of snow is burning my hands
I'm frozen to the bones, I am
A million mile from home, I'm walking away
I can't remind your eyes, your face

Retrieved from "https://lanadelrey.fandom.com/wiki/Iron_(song)?oldid=87768"
Community content is available under CC-BY-SA unless otherwise noted.