The Endless Summer Tour was the third concert tour by Lana Del Rey, it was in support of her second major label studio album, Ultraviolence. The tour was announced on December 1, 2014. Ticket sales began on December 6, 2014, with the exception of four shows which were later announced in early 2015. The tour began on May 7, 2015 in The Woodlands, Texas, and ended on June 16, 2015 in West Palm Beach, Florida.

The tour was announced on December 1, 2014 with 17 confirmed dates across North America. It was also revealed that Del Rey would be touring with Courtney Love[1] as well as other musical guest acts. Pre-sale began on December 3, 2014, and general sale began on December 6, 2014. On April 1, 2015 Del Rey announced that Grimes[2] would be touring with her for the second half of the announced dates, along with two more dates, in Atlantic City, New Jersey, on June 6, and in Mansfield, Massachusetts, on June 9. Earlier in 2015, Del Rey announced another two festival dates which would be in George, Washington, at the Sasquatch! Music Festival on May 24,[3] and in New York City, New York, at the Governors Ball Music Festival on June 7.[4]

Set design was handled by Block9, a duo comprised of Gideon Berger and Stephen Gallagher who are based in East London. They had previously worked with Del Rey on the set design of her 2013 Paradise Tour. For the Endless Summer Tour stage they took inspiration from Fritz Lang’s 1927 film Metropolis. Block9 created a stage set comprising a 'graphic-novel-noir' cityscape lit by vintage theatre lights. Designed to integrate seamlessly with show lighting and video, the cityscape also housed a state of the art LED matrix. Everything was built in London and shipped to the United States.[7]

The stage set-up featured large illuminated cityscape props on each side of the stage as well as smoke machines. Hollywood-style theatre lights and a light up signature "Del Rey" sign were also significant props. The back wall of the stage served as a display area for backdrop visuals, which were mostly modified clips from Del Rey's music videos that changed as different songs were being performed.

The setlist varied from date to date, but in total is composed of 21 songs: 7 from Ultraviolence, 5 from Born to Die, 2 from Paradise, 1 from Honeymoon, 2 covers, 3 unreleased songs, and 1 other song that was used as an intro at each show.[8]

Songs marked with an asterix (*) were not performed on every date. "You Can Be the Boss" was only played on the first date of the tour, and "Old Money" was sung in its place on the June 14 date. "Ride" was performed on the June 6, June 13, June 14 and June 16 dates in place of "Brooklyn Baby". "Why Don't You Do Right?" and "Us Against the World" were not performed at every show, instead being featured on select dates only. On the final date of the tour, June 16, Del Rey debuted a performance of "Florida Kilos" in place of "Why Don't You Do Right?" before "Off to the Races". At the same show, Del Rey previewed an acapella snippet of "Honeymoon"[9] from her third major-label record, Honeymoon, for the first time.

The official promotional tour posters were designed by American contemporary graphic designer, pop-artist, and director, Kii Arens, who also designed the LA to the Moon Tour posters and a promotional poster for Del Rey's "Freak" music video premiere. The photo of Del Rey was photographed by Patrick Hoelck. 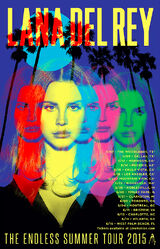 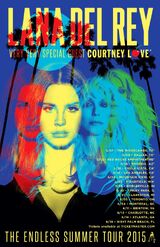 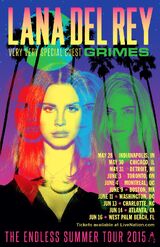 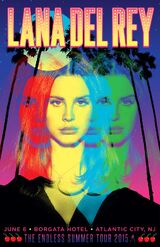