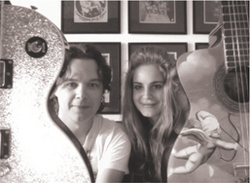 Chris Braide is an English singer, songwriter and producer based in LA. He has written and produced songs for artists such as Christina Aguilera, Paloma Faith, Kylie Minogue, and Cheryl Cole. He worked with Lana Del Rey on her album Born to Die, as well as various unreleased songs.

Retrieved from "https://lanadelrey.fandom.com/wiki/Chris_Braide?oldid=90821"
Community content is available under CC-BY-SA unless otherwise noted.