Chemtrails Over the Country Club (album)

From Chemtrails Over the Country Club

Chemtrails Over the Country Club is the seventh studio album and sixth major-label studio album by Lana Del Rey. It was officially released worldwide on March 19, 2021, by Polydor and Interscope Records.

Del Rey first revealed that she had been working on a new record on August 30, 2019, the release date of Norman Fucking Rockwell!, in an interview with Al Horner for The Times. In the interview, she announced that the title of the project would be White Hot Forever and explained that parts of the album had already been written. Del Rey estimated that the record would most likely be released within 12 to 13 months of the interview, in 2020, as a surprise release.[1] Del Rey also revealed that the record would sound similar to her previous album, Norman Fucking Rockwell!.

On November 6, 2019, a fan posted to Reddit that Del Rey had told her White Hot Forever may not be the album title. These claims were later proven to be true in a video posted by Del Rey to her Instagram on May 25, 2020, where she announced the new title Chemtrails over the Country Club.[2]

On August 6, 2020, Del Rey posted a snippet of the track "Tulsa Jesus Freak" to her Instagram. She later archived the post but the video remained available on her Facebook page.

Del Rey announced in an Instagram post that the song "Let Me Love You like a Woman" would be released as a single on September 1, 2020. In her announcement, she also mentioned that she and her team were filming a music video for the title track "Chemtrails Over the Country Club". It was shot and directed by BRTHR. Del Rey also tagged Neil Krug, the photographer who worked on the Ultraviolence cover, in the caption, leading fans to suspect he may be involved in the visuals for the new album.[3]

In Interview magazine, it was revealed that Del Rey produced the entirety of the album along with Jack Antonoff.[4] When the album tracklist was shown to include Yosemite, the involvement of Rick Nowels was also confirmed.

On October 22, 2020, Del Rey posted behind-the-scenes footage for a music video to both her Instagram and Twitter accounts.[5] On Instagram, she tagged BRTHR in the caption. The producer later confirmed on his Instagram story that a music video would be coming soon.

A teaser of the music video for the title track was posted by Del Rey on December 22, 2020, announcing the song would be released on January 11, 2021, alongside a pre-order for the album.

Chemtrails Over the Country Club is Del Rey's second album after Lust For Life to include featured artists. These artists include Zella Day, Weyes Blood and Nikki Lane.

In an interview with Q Magazine in October 2019, Del Rey hinted at the theme of the album saying, “I only think of star signs for the next thing I’m doing.”

On May 21, 2020, in an Instagram post, Del Rey discussed double standards felt by women in the music industry. She added that the topic had influenced her writing, saying, “I’m sure there will be tinges of what I’ve been pondering in my new album”.[6]

It was rumored that the cover would be shot by Neil Krug, who had previously worked on the Ultraviolence cover and the shoots for both Lust for Life and Honeymoon. When the artwork for the album was revealed, Krug was confirmed to have shot only the HMV exclusive cover. The photographer for the album cover photoshoot and the standard artwork was shot by Charlie Grant. The back cover was shot by Izak Rappaport. 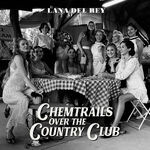 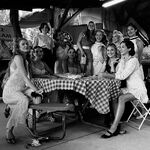 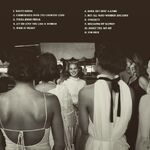 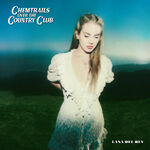 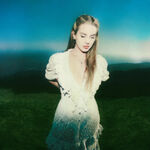 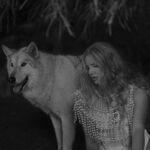 Del Rey took to Instagram on May 21, 2020, to announce the release date of the album.[6] While the album was originally planned to be released on September 5, 2020, it was pushed back. The announcement came at the end of an Instagram post, in which Del Rey criticized double standards for women in the music industry.

During a book signing event for the poetry book Violet Bent Backwards Over The Grass, on October 2, 2020, Del Rey advised that the album would be released on either December 10, 2020, or January 7, 2021. She explained that the delay was due to the production process of vinyl.[7]

On December 18, 2020, ten new Shazam entries were discovered on Del Rey's profile. The Shazam links were later deactivated, but gave an indication that the tracks were expected to appear on the record.

On January 10, 2021, Del Rey announced the official tracklist, and revealed the album cover and back cover, on her social media accounts. The following day, the album release date of March 19 was announced via the description of the music video for "Chemtrails Over the Country Club".

The album was officially released worldwide on all platforms on March 19, 2021.

To promote the album, Del Rey released several vinyl, CD, and cassette variants; some of which have alternative artwork. These releases are compiled in the following galleries.

The album's first single, titled "Let Me Love You like a Woman", was released worldwide on October 16, 2020. The lead single from the record Chemtrails Over the Country Club was released on January 11, 2021. That same day, Del Rey confirmed in a BBC One interview that the third single would be titled "White Dress" and it was released on March 19, 2021. On March 26, 2021, "Tulsa Jesus Freak" was added to BBC Radio 1 Playlist, being the first song of the era sent to radio and the first since "Doin' Time".

"Chemtrails Over the Country Club"

Chemtrails over the Country Club received acclaim from music critics. At Metacritic, which assigns a normalized rating out of 100 to reviews from mainstream publications, the album received an average score of 81 based on 26 reviews, indicating "universal acclaim".

In a review for AllMusic, Fred Thomas stated that "with seventh album Chemtrails Over the Country Club, Del Rey shakes off the cocoon of her slick pop days completely, continuing the nuanced songwriting and hushed perspectives of Norman Fucking Rockwell! and turning in her most atmospheric set of songs to date."[16] Will Hodgkinson of The Times assigned the album a rating of 4 out of 5 stars and called it both "beautifully executed" and "thoughtfully realised".[15]

Lana Del Rey posted the tracklist on January 10, along with the cover art. The album has 11 tracks, 10 of which are produced by Jack Antonoff and one which is produced by Rick Nowels.

On May 16, 2021, a user on Reddit posted a photo of a page ripped from one of Del Rey's sketchbooks on display at Electric Lady Studios, where the album was partially recorded, with an early draft of the tracklisting. Some song titles were shortened or were changed before the official release.[17]

You can find the full Chemtrails Over the Country Club outtake list here.

"Loved You Then and Now" is speculated to be a working title for "Rock Candy Sweet".[S 1] The song was supposed to be the title track for her seventh major-label studio album Blue Banisters, at the time titled Rock Candy Sweet, but after a major overhaul, it didn't make the final cut.

In an interview with Jack Antonoff, Del Rey discussed including "Dealer" on the album.[4] She later told a fan that it was tentatively being included as track 8.[7] The song ultimately didn't make the final cut. However, it was repurposed for her follow up record, Blue Banisters.

"Yes To Heaven" is confirmed by insiders to have been reconsidered to be officially released and featured in a record the fourth time around, after Ultraviolence, Honeymoon, and an unreleased album with The Last Shadow Puppets. Produced by James Ford, the version meant for Chemtrails Over the Country Club is the version meant for the said unreleased collaboration album. It was ultimately cut, though a tagged version of the song leaked in 2018.

In March 2020, Del Rey posted a screenshot of her voice memo app via Instagram which showed two files. One was titled "Grenadine quarantine 2" and the second was titled "If this is the end ...I want a boyfriend". The two titles were later confirmed to be earlier versions of the fifth track of Blue Banisters, "Black Bathing Suit". Although the song may have been written or originated in this era, it is also possible that the song was never intended for this album, as she did mention that she was working on two albums at the same time.