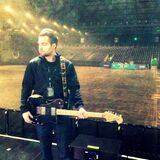 Blake Stranathan (also known as Blake Lee) is an American guitarist, songwriter, and producer who has worked with Lana Del Rey during the Born to Die Tour, Paradise Tour, Endless Summer Tour, Festival Tour, LA to the Moon Tour, as well as on the album Ultraviolence.

A former Berklee student, Stranathan has been a guitarist for Del Rey since she began promoting her first major-label studio album Born to Die. He is credited as a songwriter on three tracks from Ultraviolence, marking his first time collaborating with Lana Del Rey.

Retrieved from "https://lanadelrey.fandom.com/wiki/Blake_Stranathan?oldid=72041"
Community content is available under CC-BY-SA unless otherwise noted.