Barrie-James O'Neill is a Scottish singer-songwriter. O'Neill has worked with Lana Del Rey over the years as both a writer and producer and dated her from 2011 to 2014.

Barrie-James O'Neill's early life isn't well documented, and not much is known about his childhood. During 2009 O'Neill formed a band in Glasgow named "Kassidy" and has released four EPs and two albums. The Rubbergum EP volumes 1, 2, and 3 were released in 2010 and the two albums Hope St. and One Man Army was released in 2011 and 2012, respectively. The band released their EP People Like Me on iTunes in 2013 during their tour with Lana Del Rey. Kassidy toured with the singer during the first European portion of the Paradise Tour from April 5, 2013, to May 31, 2013. O'Neill has continued to write and release music as a solo artist under the stage names "Nightmare Boy", "Baz", and "Barrie-James". After a long hiatus, Kassidy returned with a single in 2021.

Del Rey and O'Neill worked together covering "Summer Wine", originally performed by Lee Hazelwood and Nancy Sinatra. The two created a homemade video in the style of Lana Del Rey's other homemade videos. The cover was published to Lana Del Rey's personal YouTube channel on April 18, 2013. The video features footage of Del Rey and O'Neill performing the song on the beach, and in their backyard.

Del Rey and O'Neill wrote and recorded "Unidentified Flying Bill" together in 2013 as part of Del Rey's early Ultraviolence sessions. On October 16, 2020, the first snippet leaked. Over the next year, four more snippets would leak until the song leaked in full on October 1, 2021. O'Neill also provides vocals for the song.

O'Neill was one of the writers for Lana Del Rey's album, Ultraviolence, and contributed by co-writing the song "Brooklyn Baby". The song was featured as the 4th song on the album, and a snippet was released as a part of a promotional video on iTunes. O'Neill is also listed as a co-creator of "Black Beauty" on a certain registration site, however, his contributions are unspecified.

In August 2014, O'Neill released the tracklist of his solo debut album, with the song "Riverside" featuring Lana Del Rey. The album and song were eventually scrapped in favor of a 4 track EP. "Riverside" leaked on September 22, 2015. The song was officially released on O'Neill's third studio album, Strange Desire, on November 5, 2021.

Some Things Last a Long Time[]

O'Neill produced and plays the guitar on Del Rey's cover of "Some Things Last a Long Time" by Daniel Johnston, which was recorded for the 2015 short film titled Hi, How Are You, Daniel Johnston. O'Neill and Del Rey are both executive producers for the film as well.

In September 2021, it was revealed that O'Neill would be a collaborator for Del Rey's album Blue Banisters on the tracks "Living Legend", "Nectar of the Gods", "Cherry Blossom", and the previously unheard "If You Lie Down with Me". O'Neill has writing credits on all four, has production credits on the first two, and plays the guitar and piano on the first three.

O'Neill first met Del Rey in 2011 and were seen together at the Tartan Clef Awards in November. Rumors of their relationship circled, but neither O'Neill nor Del Rey commented. The couple confirmed their relationship in February of 2012. A source close to Kassidy confirmed the relationship as well, saying, "I can confirm they are together." In July 2013, engagement rumors sparked when the couple was seen house-hunting together. Del Rey was also seen with a large ring on her finger. In January of 2014, Us Weekly reported that "multiple sources" exclusively told them that the couple was secretly engaged. According to Us Weekly, "after trying to get an official answer, there was no confirmation from Lana Del Rey or her representative". In June 2014, Del Rey revealed, in an interview with German magazine 20 Minuten, that the two had broken up. 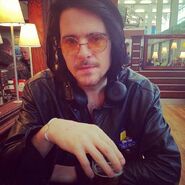 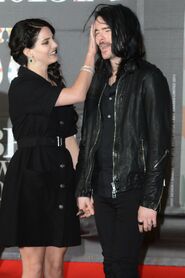 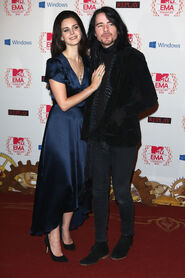