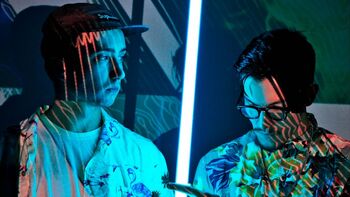 BRTHR is a direction and production company formed by Alex Lee and Kyle Wightman. The duo has worked with a variety of artists, such as Lana Del Rey, The Weeknd, Selena Gomez and Travis Scott, among others.[1]

Alex Lee and Kyle Wightman met in the New York's School of Visual Arts, where they studied for two years before dropping off. Soon after, they shot their first short movie, titled "Tokyo Slo-Mode", which led to the creation of the company. The following years, they took part in several projects, which include short movies, publicity campaigns and music videos.[2]

Some of their notable works include the music videos for "Butterfly Effect" and "Goosebumps" by Travis Scott, "Rare" by Selena Gomez, "Party Monster" and "In The Night" by The Weeknd; adverts for Spotify, Facebook and Adidas, and stage design for performances by Miley Cyrus and Travis Scott.

In 2021, BRTHR directed the music video for "Chemtrails Over the Country Club". The video marks the first and only collaboration between the duo and Del Rey.