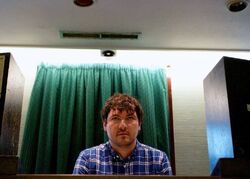 Anthony Edward Whiting better known as Ant Whiting is a British songwriter, multi-instrumentalist, and producer signed to Sony/ATV Music Publishing. He is affiliated with artists like John Newman and Rizzle Kicks. He worked with Lana Del Rey in 2010 as co-producer with Miranda Cooper for her songs.

Retrieved from "https://lanadelrey.fandom.com/wiki/Anthony_Whiting?oldid=77593"
Community content is available under CC-BY-SA unless otherwise noted.